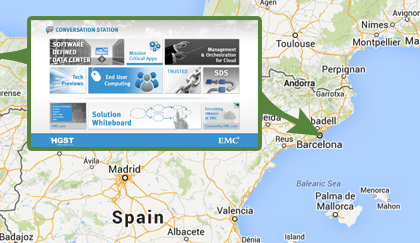 The EMC Conversation Station, an interactive presentation application, made its global debut in Barcelona, Spain this month. It was supporting the EMC booth at the VMWorld event, and covered important event topics by including demo videos and presentation files. The application was deployed on four 46″ touch enabled displays that were situated on the booth corners for easy access for event patrons.   The application was created earlier this year for the EMC Events Marketing team and made its debut at the VMWorld conference event in San Francisco over the summer. Housing various demos and presentations per seven event topics, presenters at the event are able to bring up specific files while talking to interested event patrons. The application also has a digital whiteboarding and solution tool to allow for customized solution diagramming on the fly with the visitor.   After another successful deployment at another conference event in San Francisco, Oracle World, the EMC event team starting planning for another VMWorld event in Barcelona, Spain. With the application being based on a cloud content management system, the new content was easily uploaded from various international team members and all pushed down to the media players when they were setup in Barcelona. Even after the first day of the event, new content was uploaded over the night and was readily available within the application for the next day.