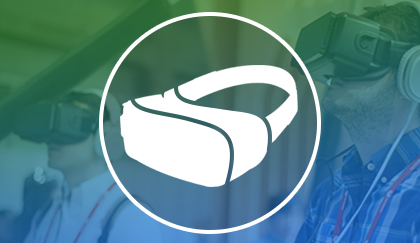 The Virtual Reality (VR) industry has been making some subtle noise over the last decade but over the last 12 months the technology has been making a big push towards more consumer and enterprise availability. Regardless if the hype has mainly been because of Facebook’s purchase of Oculus or Samsung promoting its main mobile device, the Galaxy, integrating with the Oculus Rift, the VR topic is mainstream now and seems likes it’s here to stay.   Virtual Reality has definitely gained the interest of consumers, with one 2016 survey showing 70% of respondents saying they have interest in VR and 44% overall saying they are very interested.1 Another statistic from this year shows the 2015 number of VR headsets shipped globally at 140k and from 2016 numbers so far, has an estimate of around 1.43 million to be shipped by end of the year.2   As the technology becomes more prevalent and companies start exploring more in its integration and development platform opportunities, keep an eye out for when it starts to become a staple in enterprise technology options. Below are some insightful articles on Virtual Reality that can help get you up to speed with the popular technology.   How Virtual Reality will Impact Businesses in the Next Five Years Although not yet in the hands of everyday consumers, virtual and augmented reality are gaining traction. To learn what we can expect, 13 technology executives from Forbes Technology Council offer their insights into the next five years of VR and AR technology. View their take on it here: http://www.forbes.com/sites/forbestechcouncil/2016/07/22/how-virtual-reality-will-impact-businesses-in-the-next-five-years/#531a67852241   Major Brands Are Investing in Virtual Reality About 75 percent of the Forbes World’s Most Valuable Brands have created some form of virtual reality or augmented reality experience for customers or employees, or are themselves developing these technologies. Given that this study was conducted in October 2015, the number is likely significantly higher. View the full list of brands here: http://blog.youvisit.com/virtual-tours/blog/unveiling-youvisits-virtual-reality-brand-power-index/   Virtual Reality: Virtually Ready for Pro AV See what AV/IT organization InfoComm published about virtual reality surging in the industry, having deep roots and big future opportunities that have AV integrators prepping to seize the opportunity. Read the article here: http://www.infocomm.org/cps/rde/xchg/infocomm/hs.xsl/44801.htm   The Mainstream Basics on the Virtual Reality Industry TIME Magazine took a deep look at the mainstreaming of virtual reality, the long-promised technology that is now becoming widely available to consumers. See what they learned on topics of VR CEOs, Silicon Valley trends, coolest app genres, to industry reactions. View their learnings here: http://time.com/3986185/virtual-reality-headset   References Reference 1: http://www.statista.com/statistics/456810/virtual-reality-interest-in-the-united-states/   Reference 2: http://www.statista.com/statistics/509154/head-mounted-displays-worldwide-shipments/