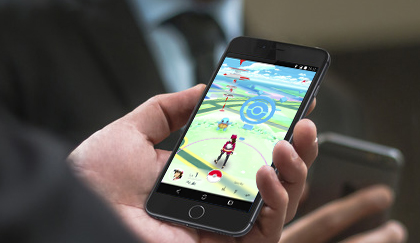 If you haven’t seen it, then you’ve at least heard about it by now: Pokemon Go, the mobile game that gets people out and about by integrating video games with a smartphone’s GPS function. Pokemon Go become the most popular mobile application of all time when it reached over 21 million daily active users in the U.S. the week after it launched. This goes beyond the stereotypical target of children and teens; adults are using this app to get out and about.   What’s the trick to its success? There are several factors, all combined brilliantly in Pokemon Go. Here are our top three ways to bring this to enterprise.   1: Be Mobile   Modern engagement works best when it’s connected to a mobile device. This lets people be on the go and on their own device at any time. It’s simply faster, easier, and more efficient than engaging through a laptop or desktop. Thus, whatever your corporate tool is, make sure that its accessible by mobile (either a mobile-friendly website or a downloadable app) to maximize accessibility and flexibility.   Is mobile that important in the grand scheme of things? Yes! As of 2015, digital media engagement time in the US had a big shift when mobile at 51% surpassed desktop at 42%.1   2: Engage Through Gamification   Gamification is the notion of turning processes into a fun game-like experience. Corporate tools and experiences can incorporate this by providing rewards and utilizing addicting game mechanics that brings people back day after day. Gamification works because it turns passive experiences into active engagement, even competitive experiences, something that captures attention span and remains at the forefront of user’s minds. This is particularly effective if it can easily relate to the real world, such as how Pokemon Go integrates with real-world maps.   Based on a survey in 2015, 79% of participants said that they would be more productive and motivated if their learning environment was more like a game.2 For bonus points, the survey included various questions about point systems, difficulty levels, leaderboards, level progressing, progress bars, competition with friends, virtual gifts, and being part of a narrative or story.   3: Embrace Cutting-Edge Technology   Some tech trends come and go, such as the motion-sensor wave that came with the Nintendo Wii. However, augmented reality (used in Pokemon Go) has been around for some time, and it has gradually gained momentum with the rise of smartphones and their evolving capabilities. Using AR as a platform can offer innovative and creative ways to engage your enterprise platform and connect with your digital displays. From client demos to virtual tours, even immersive experiential ideas, AR engages in a way that apps and websites simply can’t. Pokemon Go had demonstrated the possibility of AR — all you have to do is apply it to your enterprise needs.   Are you doubting Augmented Reality and Virtual Reality technology as tools? CEO Mark Zuckerberg stated that the Oculus Rift headset (the first mainstream virtual reality product) would initially be marketed for “immersive gaming” but eventually expand as “a platform for many other experiences” like attending live events, taking remote lessons, or visiting faraway places.   No one could have predicted the way that Pokemon Go infiltrated the mainstream, even surpassing active Twitter users per day. Now it’s possible to examine its formula to deconstruct it and apply those elements to the corporate world. The easy thing is to project this into the gaming space, but creative enterprise companies can utilize these impactful ideas and take them to a new level of customer engagement.